Contribution to the industry’s development

As part of its efforts to promote the ESG agenda, INTECO keeps focus on developing initiatives designed to make the construction industry’s regulatory framework more transparent and harmonised. INTECO has joined the following industry associations and non-governmental organisations.

It has developed and submitted proposals to improve the effectiveness of the Ministry’s pilot project to attract foreign labour from Uzbekistan.

INTECO joined the Russian Union of Industrialists and Entrepreneurs in 2019. The Company helps shape the business community’s views on investments in the real estate market and contributes to implementing the Housing and Urban Environment national project.

In the new convocation of the State Duma, the lower chamber of Russia’s parliament, Alexander Nikolaev became a member of a renewed Expert Council on Construction, Building Materials Industry and Problems of Shared-Equity Construction for the Duma’s Committee on Construction, Housing and Utilities.

INTECO’s President is a member of the interdepartmental working group focused on improving the mechanism for attracting foreign labour to the Russian economy, which was approved by the Government’s anti-COVID-19 task force.

Since 2020, INTECO’s President Alexander Nikolaev has been a member of the General Council of Business Russia (nationwide business association).

In 2020, INTECO joined the programme for  innovative technologies run by the Moscow Agency of Innovations. As part of the programme, INTECO is to create a pilot platform for testing new BIM solutions and innovations in operating residential developments.

INTECO’s President Alexander Nikolaev is a member of the Expert Group of the Government Commission for Economic Development and Integration. The Group is engaged in developing road maps and implementing action plans within the Transformation of the Business Climate initiative.

Alexander Nikolaev joined a renewed Board of Trustees of the National Research Moscow State University of Civil Engineering (chaired by Marat Khusnullin).

The general meeting of members of the National Association of Organisations in Information Modelling Technologies (NOTIM) elected NOTIM’s Supervisory Board, which now includes Alexander Nikolaev, INTECO’s President. NOTIM serves as a platform for interaction between business and government, and consolidates and represents the expert community by promoting its views, developments and proposals on the construction industry digitalisation.

INTECO seeks to create infrastructure for a healthy and comfortable living both in our own residential quarters and in neighbouring areas.

To take care of the residents living in the vicinity of our construction sites during the construction period, we:

Each of INTECO’s projects provides for comprehensive site greening and creation of unique natural settings. For example, boasts a nature trail, Westerdam features an apple orchard, and Sadovye Kvartaly in Khamovniki has its central area with a park and pond open for all people living in the district.

When implementing projects in areas with historical buildings, the Company pays close attention to preserving cultural heritage. For example, Ilyinka, 3/8 blends smoothly into Moscow’s architectural landscape and focuses on the restoration and adaptation of cultural heritage sites to preserve its historic urban environment. When designing and implementing its development projects, INTECO also strives to preserve natural ecosystems and landscapes. For instance, the  project seeks to preserve an exclusive isolated ecosystem in the Setun River valley with a park reserve and an embankment. The genuine feeling of nature being right on your doorstep will be complemented by a courtyard featuring a multicoloured garden.

On New Year’s Eve, the Company held a Wish Upon the New Year Tree charity event for its employees. Cards with wishes of children from the Rodnichok orphanage in Kalyazin, Tver Region, appeared on the New Year tree in INTECO’s office. Company employees bought gifts that were later delivered to the orphanage just in time for the New Year. The children were happy to get the new toys and other gifts they dreamt would be under the tree, and shared their joy with each other.

Charity expenses for 2022 are expected to exceed RUB 75 million as well. The Company will continue to support veterans, medical institutions, children and those in need.

Support for culture and education

As part of its cultural initiatives, INTECO focuses on supporting contemporary artists and cultural events, with works of art being an organic part of the Company’s projects.

Among the highlights of the Russian art scene in 2021 was a Red Garden sculpture exhibition held from 1 July to 12 September on Red Square as part the GUM-Red-Line festival and supported by INTECO as its general partner. The cultural significance of the event was amplified by both its iconic venue and the impressive collection of art pieces assembled by Arkhstoyanie’s curators, with the exhibition providing space for free expression by eminent Russian artists on themes of their interest. Among the participants were household names belonging to several waves of Russian art of the last 30 years, including Nikolay Polissky, Aristarkh Chernyshyov, Rinat Voligamsi, Dmitry Zhukov, Andrey Filippov, Roman Ermakov, Dmitry Aske, Vasilisa Prokopchuk and Evgeny Bragin. 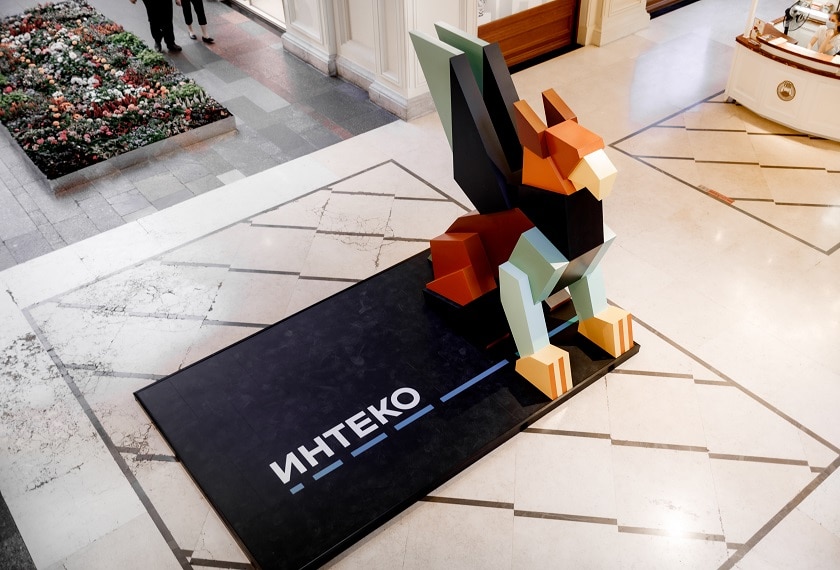 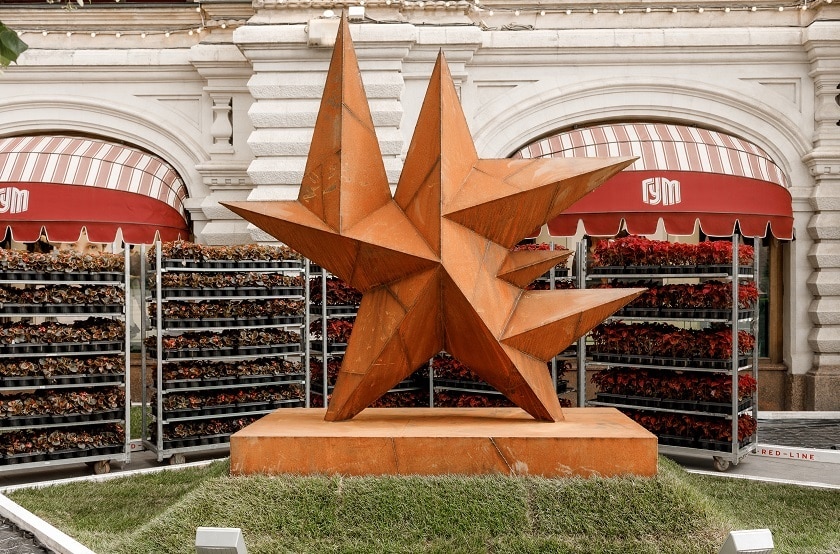 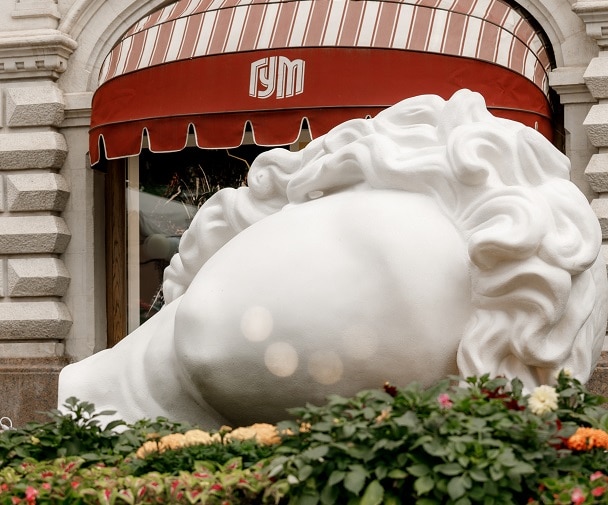 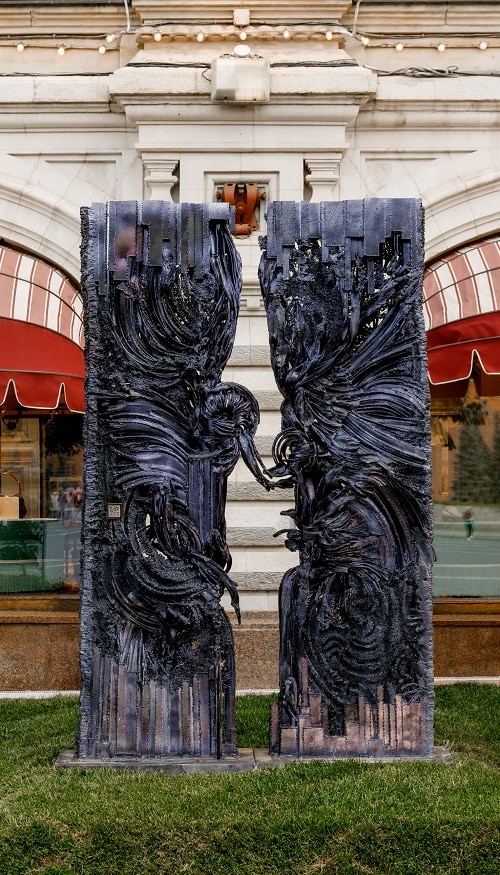 After the exhibition, artwork from INTECO’s collection was taken to other public spaces and museums. Stable Composition by Roman Ermakov can be found in Zaryadye Park, Big Head from Ancient Times by Aristarkh Chernyshyov now resides in the State Tretyakov Gallery on Krymsky Val, and French de Sad by Dmitry Zhukov is kept at the Setun River Valley nature reserve. Other works will find home on the Company’s housing estates. INTECO has been building and expanding its XXL collection of public art since 2019.

Among the projects implemented with the financial and organisational support of the Company was the filming of Moscow Slide, an important short film based on a story by a famous contemporary author Alexander Tsypkin and shot in the courtyard of the legendary Sadovye Kvartaly in Khamovniki. The film starring Anatoly Bely, Victoria Tolstoganova, Fyodor Bondarchuk and Andrey Smolyakov was directed by Radda Novikova. INTECO’s First Vice President Evgeny Semenov made a cameo appearance, while Anzhelika Pashkova was a producer. The movie was named the Best Moscow Film at the annual international MosFilmFest festival of auteur cinema. Its success convinced the producers to continue the project and embark on a series.

In 2021, INTECO won an award at the International denkmal, Russia — Moscow Specialized Exhibition dedicated to the preservation, restoration, use, and promotion of cultural heritage, redevelopment and museum technologies. The Company’s stand showcasing Ilyinka, 3/8 came out on top in the Best Stand category. The project will see the construction of the Ilyinka, 3/8 housing estate featuring white-stone walls with styled facades and located near the Kremlin in Ilyinka, one of the oldest business streets in Russia’s capital. The architectural concept designed by Kleinwelt Architekten includes such details as arched windows and entrances, as well as the use of patinated brass and natural stone finishings with mythology-themed reliefs. The exhibition was held under the auspices of UNESCO and supported by the Russian Ministry of Culture, the Moscow government and the Magistrate of Leipzig.

Art is an integral part of our projects. In 2021, INTECO launched sales in Aske’s Pyatiy element project in Rostov-on-Don, which saw Dmitry Aske, a well-known Moscow “street wave” artist, invited to decorate the facades of the houses, interiors of the public areas, and convey his personal style.

INTECO contributes to building an effective system for training construction experts. In 2021, the Company focused on students. We have partnered with the National Research Moscow State University of Civil Engineering, Moscow State Institute of International Relations, Peoples’ Friendship University of Russia, and Russian Presidential Academy of National Economy and Public Administration.

The Company’s experts also help universities bring their curricula in line with the latest construction practices. As part of these efforts, in spring 2021 a lecture on key income and expense drivers in budgeting and designing was held for students of the National Research Moscow State University of Civil Engineering. A look at INTECO’s Ilyinka, 3/8, Sadovye Kvartaly, , Vrubelya, 4 and Westerdam projects helped the students learn about product line-up building, construction unit cost calculation, key income and expense drivers, and effective design solutions. As an exercise, the students calculated construction expenses for  structures and unit costs per sqm of floor area for one of the projects. The meeting continued a series of events organised by INTECO together with the country’s leading construction university and offered the students the opportunity to visit ’s construction site. 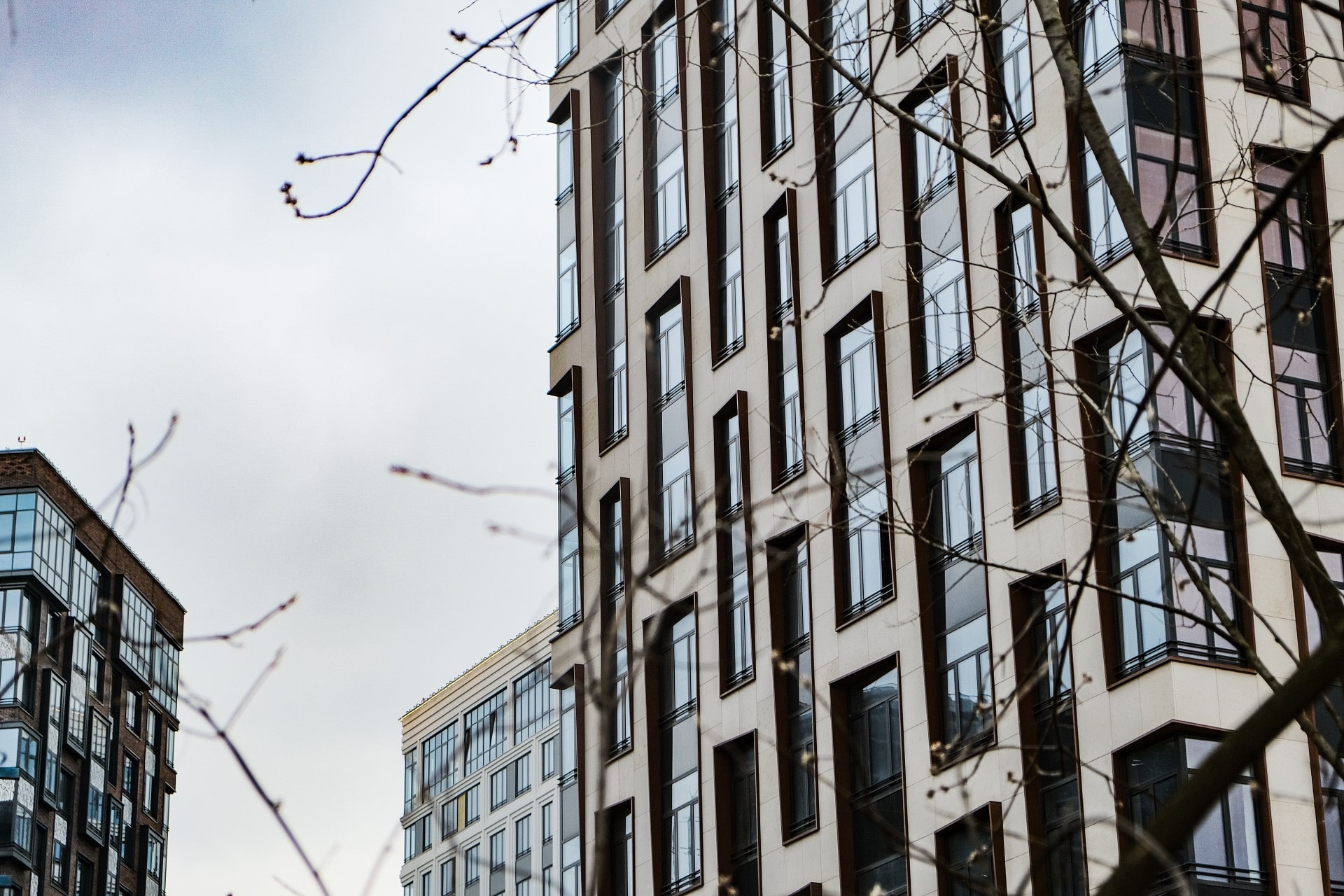